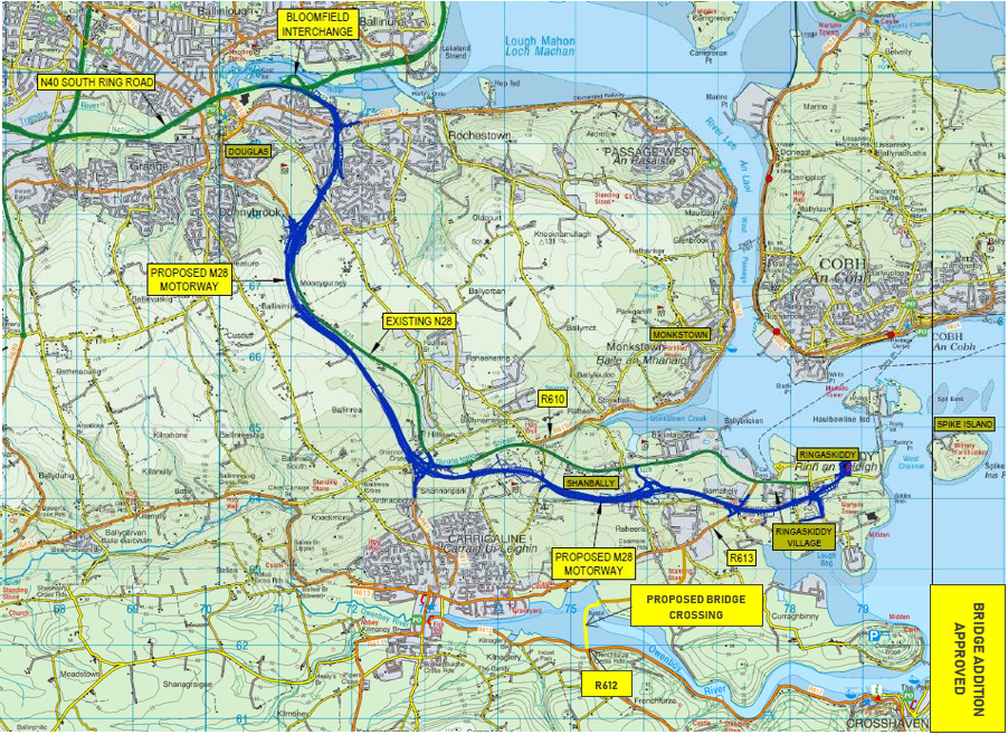 (April Fool's 1st April 2019 only)
Cork County Council, Cork City Council and Transport Infrastructure Ireland have all welcomed the decision by An Bord Pleanála to grant approval to the M28 Cork to Ringaskiddy Project.
This €220m Project has local, regional and national significance. Locally, the road scheme increases the capacity and safety of the N28 National Primary Route in the south city environs. Furthermore, the relocation of the container terminal from Tivoli to Ringaskiddy, frees up a considerable land bank immediately north of the river on the edge of Cork City centre, which will have significant benefits and assist in the development of the Cork region.
Regionally, it delivers critical infrastructure for the Port and for the industries in the Strategic Employment Area on the Ringaskiddy peninsula. The M28 is the transport infrastructure that can lead to improved capacity in the various industries as they continue to compete within their own sectors.
Nationally, in a post-Brexit era, the Port of Cork is increasingly important as the closest port to mainland Europe and to EU markets.
Improved access to Ringaskiddy has been specifically identified in Government’s National Planning Framework –  Project Ireland 2040, as a key growth enabler for the Cork region, in addition to the upgrade of the M8/N25/40 Dunkettle Interchange, already underway, and the M28 corridor is part of the Trans-European Transport Network, providing access to the Tier 1 Port at Ringaskiddy, triggering a requirement that the Port is served by a high quality motorway or express road.
The project will include 13 km of new motorway/single carriageway from the N40 to Ringaskiddy in addition to numerous new junctions and pedestrian/cyclist facilities and a new Service Area to cater for heavy goods vehicles using the Port.
The main benefits of the M28 scheme are:
·         Enhanced regional connectivity and acting as a key growth enabler for the Cork region,
·         To meet TEN-T core network requirements, thus facilitating economic development in the local area and nationally,
·         To support the strategic development of the Port facilities at Ringaskiddy, in accordance with European and National Policy and in turn assist in the ongoing development of Cork,
·         To increase the safety and capacity of the N28 corridor to meet existing and estimated future traffic needs,
·         To improve access between Cork and Ringaskiddy in a safe and sustainable way.
Transport Infrastructure Ireland is the Funding Authority for the M28 Project and the project has been included in the Infrastructure Capital Investment Plan 2016-2021 as well as the recent National Development Plan. Cork County Council will now consider the next steps with a view to ensuring that it can progress to construction as soon as possible. See also the Owenabue Estuary Bridge Crossing (April Fool's 1st April 2019 only) which has been approved as an addition to the M28 project.